Most of the time, the organization uses Remote access or Virtual Private Network (VPN) solution that offers an encryption tunnel between endpoints, like remote users and the corporate network. Usually, VPNs are not designed to support real-time media traffic and introduce an extra layer of encryption on top of Teams media traffic that’s already encrypted. This means it adds overhead to Teams media packets. Additionally, connectivity to the Teams service (Office 365) might not be efficient due to hair-pinning traffic through a VPN device. For VPNs, the suggestion is to provide an alternate path that bypasses the VPN tunnel for Teams traffic. This is generally known as split-tunnel VPN.

Why does VPN Split Tunnel require for Teams media traffic?

To provide optimal call quality to the end-user who uses Teams over VPN requires VPN split tunnel solution. In a split-tunnel VPN configuration, all IP addresses that are used by the Microsoft Teams Services (Office 365) environment are excluded, so that traffic to and from those IP addresses is not included in the VPN tunnel. This means the way VPN split tunnel must work exactly the same as external Teams client should. Most VPN solution provider supports split-tunnel; you must check the configuration for your VPN solution by checking vendor documentation. Refer the figure 3.19, which shows VPN Split tunnel works.

All Microsoft Teams signaling and media traffic split from VPN secure tunnel, as shown in figure 3.19, and going through Microsoft Teams service (Office 365). In order to redirect users away from the VPN solution for Teams, it must first be configured to support a split tunnel, which is a popular feature of today’s VPN appliances. VPN split-tunnel allows Teams traffic without going through the VPN Tunnel. For example, the Teams site teams.microsoft.com external web traffic to not traverse over VPN solution. Without split-tunnel, the default VPN configuration will force all the Teams traffic through the VPN tunnel.

There are different ways to achieve a VPN split tunnel for Teams media and signaling traffic.

Using 3rd party VPN solution: in this topic, we are covering VPN split tunnel configuration based on Pulse secure VPN solution as an example. I would strongly recommend contacting your VPN vendor for split tunnel configuration documentation. There are different approaches and solutions to implement VPN Split tunnel, and I am presenting here a combined solution to using a VPN concentrator and your corporate firewall.

Split Tunnel solution is a combined solution using a VPN concentrator and your firewall.

To implement a VPN split tunnel for Teams one-to-one call traffic, you must create below rules on your corporate firewall.

Apart from above Teams conferencing traffic, you can enable the blockage to UDP/TCP source port for Teams Audio, Video, and application sharing. Basically, Microsoft Teams, by default, has a limited scope of UDP/TCP port it will be using as the source port for communication. If you block these source ports from coming in the VPN tunnel, then the media should go via the externally splitting from the VPN tunnel. That will ensure even two users both connected via VPN, and their Teams media traffic will not allow hairpin via their VPN connection but directly goes from their internet connection to each other.

You can get Teams Audio/Video, and Application Sharing client port ranges from Teams admin center: login to Teams admin center, then go to a meeting and then meeting settings under Network. Refer below figure 2. 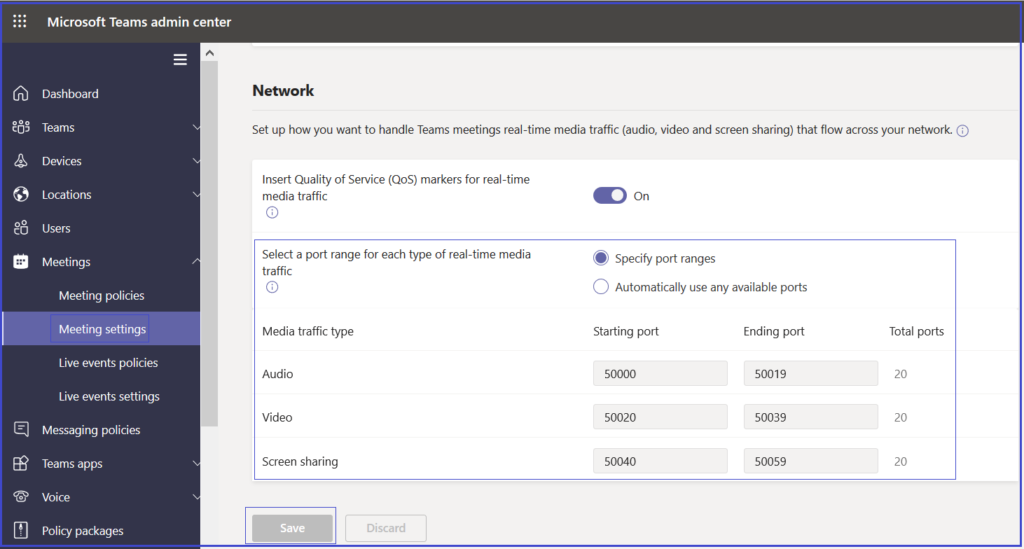 Does this topic apply to Skype for Business Online?

How to verify VPN Split Tunneling?

To verify the VPN split tunnel, you must connect using the external network (wired or wireless) and then connect the VPN, which has the Split Tunnel implemented.

Providing optimal experience to the end-user community is our main goal, and using VPN split tunneling is helps to achieve this through blocking the Teams client from connecting via VPN tunnel, and the media will always go through the externally not via VPN tunnel, which will eliminate extra hop, double encryption, etc.